The factory of VINFAST has a standard technology of the Industry 4.0 with up to 1,200 robots

The factory of VINFAST has a standard technology of the Industry 4.0 with up to 1,200 robots

In recent days, Vinfast is perhaps the prevalent name in the automobile and motorbike industry, ever since it officially announced its largest vehicle production project in Vietnam to date.  Recently, at the High Level Forum and International Exhibition on Industry 4.0, Vinfast continued to make an impression when revealing details about this modern production complex. 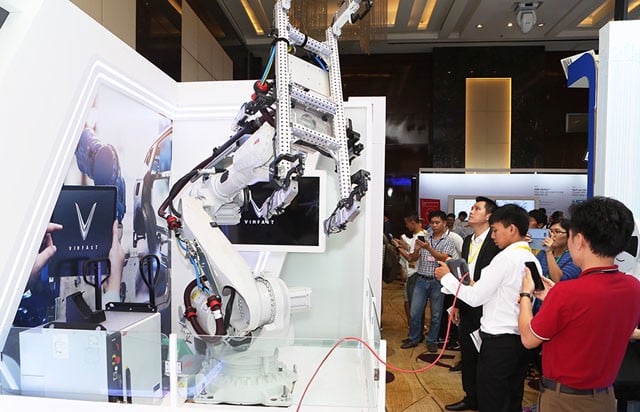 One robot used in VINFAST factory was showcased in the exhibition

According to Mr. Vo Quang Hue, Deputy General Director of Vingroup, who is in charge of the VinFast automobile project, the most advanced international technologies are the standard for all the factories of VINFAST.

"We will be using 4.0 technology to help devices, lines in production chains or multiple factories be linked together through cloud computing and the Internet. They will be automatically interactive with each other to minimize damage and maximize productivity of the production line" Mr. Hue said.

According to his disclosure, the VinFast project consists of 5 factories that are compatible with the 4.0 technology, including the stamping shop, the car body welding shop, the painting shop, the engine shop and the finishing assembly shop. These factories have had top names such as Schuler, Thyssen Krupp, Duerr, Eisenmann, Grob, MAG, Scheuchl, ABB, AVL, etc design and install.

The most prominent is the welding shop, with the most modern design in Southeast Asia. The factory will have about 1,200 robots manufactured by ABB; The link between robots, humans and machines and equipment is complete with platform 4.0."This is a shop with Industry 4.0 applications in a variety of areas, such as device monitoring, optimized production process optimization, device optimization, maintenance management, flexibility and adaptability ".

In addition, the painting shop will also be equipped with 79 robots, in which robotic controllers have the ability to check, forecast when and where to repair and maintain the details in advance, so as to avoid factory shutting down all of the sudden.

Sharing about the experience of building a production complex with technology 4.0, Mr. Hue confirmed the human factor is extremely important. For the comments that industry 4.0 will lead to unemployment for workers, Vingroup has rebutted them with the investment action of more than $ 10 million to establish VinFast Technical Training Center, each projected year of training 600 engineers, to become the future human resources for revolution 4.0.